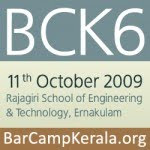 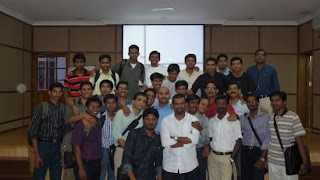 Later, as the BarCamp wound up, some of us stood in the verandah discussing various random stuff. This was quite an informal talk, but we enjoyed a lot. I could also meet @crazyjibin with whom I've only interacted on twitter. I left the venue with @albins, who was kind enough to offer me a lift to Kakkanad junction. This was a very interesting BarCamp, quite unlike the boring one at IIM-K. Thanks to organisers, and fellow BarCampers. Photos: here. Video (thanks to @karmadude): here.
Posted by Mahesh Aravind at 8:58 am

After hearing the report, I really regret being late for Praseed Pai's presentation and for leaving early!

Thanks for pointing it out. Fixed it there.

I was not trying to field anyone, It's basically I was trying to be "always positive" - :) - I know there are some negative sides for always being positive. And thanks for the open views.

One more line caught my attention - "I wanted to know why the media is not bringing out the fad behind Fadia." - Good question - I wish media had the power to bring out all the truths happening around us - I hope you got the answer for your question :)

I am glad that we all met and exchanged our views and thoughts. Will meet up soon.

No hard feelings, pal. I understood you were sticking on to *NOT* paint anyone in a bad light.

LOL, regarding 'my question' I haven't (yet) got a satisfactory answer, but I definitely understood what you're hinting :) I know :-p

Looking forward to meet you soon, hope to see you at the next OWASP meet. Keep up great work!

Great Writeup, Obviously the extempore presentation came with its flaws. Thanks for notifying.

Why does Vishnu hate MindMaps? He should have been there, would have loved to fight with him. We already have a Windows over MAC fight going on.

(Hey, I have used MAC for pretty decent time, the fight is for fights sake, but me a MAC and I will happily use it, but I wont probably dumb my PC, where will I run all the cracks? :D )

This work is licensed under a Creative Commons Attribution-Noncommercial-No Derivative Works 3.0 Unported License.